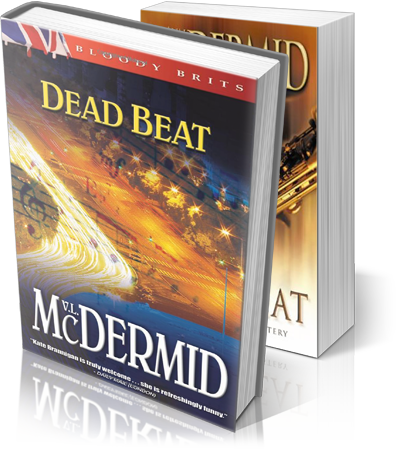 Synopsis:
Dead Beat introduces Kate Brannigan, a female private detective set to do for Manchester what V.I. Warshawski has done for Chicago.

As a favour to her rock journalist boyfriend, Kate agrees to track down a missing song-writer Moira Pollock, a search that takes her into some of the seediest parts of Leeds and Bradford. But little does she realise that finding Moira is only a prelude to murder. Juggling her other cases, including a search to uncover the source of counterfeit luxury goods, Brannigan finds herself for the first time on the trail of a killer.

Kate Brannigan is a sparky, funny and much to be welcomed entrant into the still tiny profession of the female private eye… [Dead Beat is] tough, exciting, moody and unpredictable

You’d have to go far to meet a tougher girl gumshoe.

Fresh and funny, with a spanking sense of time and place.

McDermid’s snappy, often comic prose keeps the story humming as Kate is drawn deeper and deeper into the twisted plot of her murder investigation.

Kate Brannigan is a sparky, funny and much to be welcomed entrant into the still tiny profession of the female private eye.