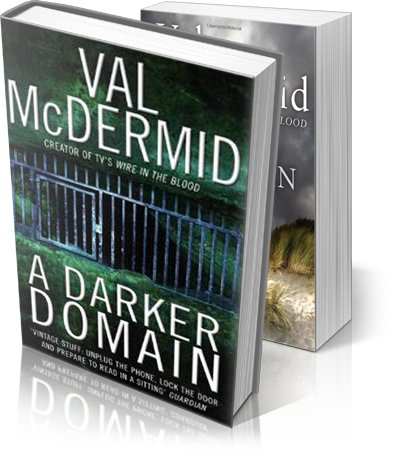 Synopsis:
The superb new psychological thriller from bestselling author Val McDermid mixes fiction with one of the most symbolic and exceptional moments in recent history – the national miners’ strike It seemed like an unsolvable mystery at the time: a wealthy heiress and son kidnapped in Fife, then a botched payoff, leaving her dead with no trace of the child. So when, over twenty-five years later, a possible clue is discovered by a journalist in Tuscany, cold case expert DI Karen Pirie doesn’t hold much hope of unravelling the infamous enigma.

She’s already investigating a case from the same year. At the height of the miner’s strike, Mick Prentice broke ranks to join ‘scab’ strike-breakers down south. But new evidence suggests Mick’s disappearance may not be as straightforward as that – and Karen’s investigations take her into a dark domain of secrets, betrayal and the ultimate violence! Past and present intertwine in a novel of taut psychological suspense that explores the intersection of desire and greed.

A Darker Domain Was Shortlisted In The Mystery/Thriller Category For The Los Angeles Times Book Prize.

One of the world’s leading mystery writers… Thomas Harris crossed with Agatha Christie, if you will… a great read.

A cleverly plotted thriller. It should gain her a crowd of new fans.

One of her best.

A real page-turner and another McDermid triumph.

McDermid’s plot is a classic, and she pulls out all the stops to achieve a sense of mounting anguish, as her hero juggles multiple red herrings, mixed loyalties, differing police agendas and complicated family ties. Impeccable.

Reminiscent of one of Ruth Rendell’s Barbara Vine thrillers – a few more sly, old-fashioned whodunits like this and she’ll join the sturdy ranks of the queens of crime, on course to become Dame Val or Baroness McDermid.

Val Talks About Her Novel – A Darker Domain…

People sometimes remark that I must work hard to produce a book a year. They look offended when I laugh. Then I explain. And they get it. Both my grandfathers were miners. The one who only had daughters rejoiced that no child of his was going to have to spend a working life underground. Deep underground in the heat and the stink and the filth and the danger, they knew what hard work was, my grandfathers.

If you want to know the history of East Wemyss, don’t bother asking anyone who lives there. Google it instead

I spent a lot of my childhood in East Wemyss, staying with my grandparents. My grandfather once took me underground in the cage, strictly against the rules. I was about six years old, a lover of fairground rides and scary helter skelters. Nothing had prepared me for the way the cage dropped through the darkness, so fast I felt weightless, my stomach left behind somewhere above me. The faces around me, weirdly lit by the lamps on their helmets, were unmoved. They were used to so terrifying a start to their shift. They were destined for eight hours of hell, relieved only by the companionship of the other men on their gang. Me, I went straight back to the surface. My grandfather took me to the canteen for steamed pudding and custard.

Another memory from childhood: a close family friend, Uncle Doddy, was caught in the blast when a fuse burned too fast and a shot fired too soon. His face was wrecked, healing into a mask of scar tissue and blue-black coal tattoos. He lost most of his eyesight, spent months in a hospital bed. Everybody was reluctant to let me visit. They thought I’d be too scared. But it turned out I was too young to be scared. I knew his voice, I knew him. I had no reason to be scared. Other kids, kids who hadn’t known him before – they were scared. They were terrified of the man with the melted face.

I didn’t realise it then, but those tiny windows into life at the coal face tempered my whole experience of life in a mining village. It saved me from sentimentalising the community spirit that ran through East Wemyss like the veins in blue cheese. It was real enough, that sense of mutual support, that ‘kick one and we all limp’ mentality. People did take care of each other. It was bred in the bone, a legacy of the grim battles the miners had fought through history to earn respect and a decent living wage. My grandfather remembered when miners were treated as if they were as much the property of the mine owners as the coal itself. He remembered the strike of 1926 when he was barely thirty years old with three children and a wife to support, when they stood in line at the soup kitchen, when he walked twenty miles for a hand-out of new boots for his gang. If you didn’t stand together at times like that, you all went under. The miners united will never be defeated.

They played together as well as working together. I remember mass picnics, miners’ galas, football matches on terrible pitches, pit bands playing in Sunday parks. I remember visiting my grandfather in the miners’ convalescent home when he was recovering from his first episode of heart disease. He’d had rheumatic fever as a boy, which had kept him out of the WWI trenches but not the mines. Years underground compounded the damage. When I was growing up, he’d walked us kids for miles along the beaches and through the woods, teaching us the names of shells and trees. The last few years, he could barely make it to the end of the street. At least by the time he was sixty, they finally had running hot water. And a bath.

Our village got a preview of the devastation that would hit mining communities after they lost the 1984 strike. In 1967 a devastating underground explosion and fire killed nine men. The Michael had been a vast, showcase mine, with seams running under the sea for miles. But there’s no way to extinguish a fire like that short of sealing up the shafts. So in 1967 the Michael died and East Wemyss went into terminal decline.

The miners left to find work in other pits, taking their families with them. Only the pensioners were left. As they died off and houses were left empty, so the shops, churches and pubs closed. Then a few years ago, when Edinburgh house prices went through the roof, commuters discovered the Wemyss villages and colonised them. The pit buildings were flattened, the slag heaps trucked away and the Fife Coastal Path was inaugurated. If you want to know the history of East Wemyss, don’t bother asking anyone who lives there. Google it instead.

I’m glad my grandfather was dead before Thatcher and her vindictive crew chose the miners to be the sacrificial victims of their policy to emasculate the trade union movement. If he’d been alive, it would surely have killed him to see what happened to his village replicated all over Britain’s coalfields. The 1984 miners’ strike is part of the history syllabus now. It feels far too recent for history to have weighed those events in the balance. But at least these days, it’s not only the victors who have the chance to write the record. A DARKER DOMAIN touches on some of that history. I’m proud that it’s also part of my own past.