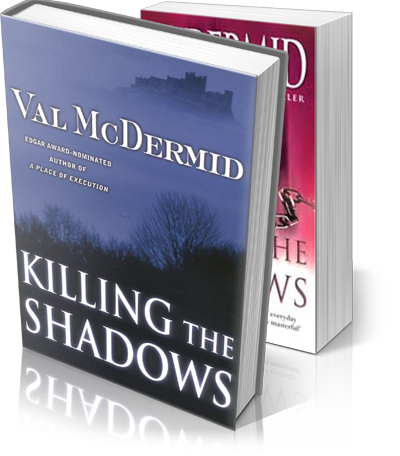 Synopsis:
A killer is on the loose, blurring the line between fact and fiction. His prey – the writers of crime novels who have turned psychological profilers into the heroes of the nineties. But this killer is like no other. His bloodlust shatters all the conventional wisdom surrounding the motives and mechanics of how serial killers operate. And for one woman, the desperate hunt to uncover his identity becomes a matter of life and death.

Professor Fiona Cameron is an academic psychologist who uses computer technology to help police forces track serial offenders. She used to help the Met, but vowed never to work for them again after they went against her advice and badly screwed up an investigation as a consequence. Still smarting from the experience, she’s working a case in Toledo when her lover, thriller writer Kit Martin, tells her a fellow crime novelist has been murdered. It’s not her case, but Fiona can’t help taking an interest. Which is just as well, because before too long the killer strikes again. And again. And Fiona is caught up in a race against time, not only to save a life, but to bring herself redemption, both personal and professional.

Rich in atmosphere, Killing the Shadows uses the backdrops of city and country to create an air of threatening menace, culminating in a tense confrontation between hunter and hunted, a confrontation that can have only one outcome.

KILLING THE SHADOWS is an absorbing read, and an entertaining showcase for McDermid’s abundant talents. McDermid … is still head and shoulders above pretty much all of the competition.

A serial killer is on the loose. His target? Crime novelists. His modus operandi? An appropriately gruesome method they have dreamed up in one of their own novels. Enter Dr Fiona Cameron, an academic psychologist who is developing scientific methods to help the police identify repeat offenders. Having sworn never to work with the Metropolitan Police after they bungled a case by ignoring her advice, she has to think again when the life of her partner, a leading writer of serial-killer thrillers, is threatened. It’s an ingenious device McDermid exploits to the hilt.

Thanks to McDermid’s brilliance you’ll still be shouting. “Behind you!” in classic pantomime fashion.

Could rank as McDermid’s finest yet crime novel… It was difficult to resist the temptation to skip pages of this brilliantly constructed story as it works up to a hair-raising climax. A high tension novel of psychological suspense from one of Britain’s best crime writers.

Another of our most vibrant mystery authors is Val McDermid, who improves from book to book. Her new thriller KILLING THE SHADOWS is as compelling as her last, A PLACE OF EXECUTION. McDermid has become our leading pathologist of everyday evil, and she both thrills and scares in this tale of celebrity stalking with a difference, in which the new technologies take on a most sinister colouring. The subtle orchestration of terror is masterful, and puts American experts such as the much-overrated Patricia Cornwell to shame.

Article from NYTimes.com – (Said to be the best review a crime novel has ever had in the New York Times…)

There’s no denying the queasy, almost sexual excitement that’s part of the lure of serial-killer thrillers, and in her vivid and adept new novel, the Scottish writer Val McDermid delivers a serial-killer thriller that mounts in tension while at the same time making readers aware of their complicity in craving the grisly shocks the genre provides. It’s a double-tracked approach that would derail a lesser writer and make an inferior book choke on its contradictions. But, as Stephen King did in ”Bag of Bones,” McDermid is trying to address the inhumanity that’s all too easy for popular writers to lapse into as they seek to titillate an increasingly jaded readership. McDermid is too sophisticated a novelist to preach or condemn. Maybe this is because in two previous books, ”The Mermaids Singing” and ”The Wire in the Blood” (fine, intelligent, gripping thrillers both), she herself was not above occasionally indulging in the genre’s gruesome trappings.

Read more of this article…

There are several gruesome passages in ”Killing the Shadows.” And nearly every one tops the one before in terms of sheer perversity. Here’s the catch: the killings and mutilations described are all excerpts from serial-killer thrillers written by characters in the book. When those same writers are killed off in almost exact re-creations of the murder scenes they’ve devised, McDermid spares us the details. She doesn’t have to describe the authors’ murders: the selections from their books already tell us how they’re going to be butchered. But McDermid’s discretion serves to make a subtler point: that real violence has an awfulness that fictional violence can never match, and that these writers are only guessing at the impact of their subject. When the thriller writer Kit Martin hears about the first murder of one of his colleagues, he remembers a reviewer who ”once remarked that Kit made his readers care so much for his fictional victims that the reader felt the shock of losing a real friend when he killed them off. At the time, he’d been proud of the comment. But back then, he’d never personally known someone who had been murdered. Sitting in a strange hotel room in an unfamiliar city . . . he finally recognized the critical comment for the absurdity it had been.”

The heroine of ”Killing the Shadows” is Fiona Cameron, Kit’s lover, an academic psychologist who has aided the police in finding killers. She is not a behaviorist. Not for her what she calls ”the touchy-feely ‘wet the bed when he was 9 and tortured the neighbor’s cat’ stuff.” Instead of projecting back, in the manner of a behaviorist, Fiona works solely on the information at hand, trying to deduce what the habits and rituals of murder can tell her about the probable identity of the killer. But Fiona’s own past has played a determining role in her life. The unsolved murder of her younger sister, Lesley, was the event that led Fiona, for whom knowledge is a sort of comfort, into her line of work.

Like Tony Hill, the profiler-hero of ”The Mermaids Singing” and ”The Wire in the Blood,” Fiona faces her fair share of suspicion from cops who see her methods as so much voodoo. When ”Killing the Shadows” opens, she has vowed never to work with the police again. Her insistence that their chief suspect in a rape and murder case is not the actual killer is, to the police’s chagrin, confirmed when the case is thrown out of court and the suspect cleared. As the book shifts into its main narrative and thriller writers start to be killed off, the tension between Fiona and the police, particularly her good friend Detective Superintendent Steve Preston, comes back into play. At first, Fiona tries to quell Kit’s fears that he is in danger. Then, as it becomes impossible to dispute that someone has targeted the group of crime writers to which Kit belongs, she has to persuade the police who have shunned her that a serial killer is on the loose.

McDermid is a whiz at combining narrative threads, shifting to the viewpoints of her various characters (including excerpts from the diary of the killer, whose identity is as unknown to us as to her characters) and ending chapters with cliffhangers that propel you to keep reading. In terms of hooking her readers and carrying them along out of sheer desire to find out what happens next, McDermid is as smooth a practitioner of crime fiction as anyone out there.
The real distinction of ”Killing the Shadows,” though, is McDermid’s unresolved rumination on what responsibility artists bear for what they create. In the past year, that subject has produced works as thorny and unique as Philip Kaufman’s film ”Quills” and Eminem’s song ”Stan.” McDermid doesn’t fall into the proscriptive language of would-be censors and editorial writers. She doesn’t think that violent art turns people into podlike monsters. But, like Kaufman and Eminem, she admits that there is no such thing as safe art, no telling what a book or movie or song will provoke once it’s sent out into the world.

WITHIN the context of a genre that depends on murder for thrills, McDermid is trying to reintroduce the horror, rather than the excitement, of violence. She is all too aware of how our culture, driven by both obsession with celebrity and detached, emotionless irony, has worked to make celebrities out of serial killers. The critic Jake Horsley has described that phenomenon as a sign of people ”so utterly, cynically bored and disgusted with their lives (and with society as a whole) that they can take a perverse, almost suicidal pleasure in seeing it all come apart before them.”
McDermid doesn’t play into that pathology simply because even as she acknowledges the world’s potential for violence, she makes the world seem like a pretty good place to be. Too many mystery writers who delve into the personal problems of their heroes wind up with books in which glumness and depression are the only respites from violence. McDermid writes to make friendship and love and work seem like both sustenance and refuge (it’s a pleasure to read a novelist who doesn’t moan about writing but describes its privileges and pleasures), things worth preserving. There is no one in contemporary crime fiction who has managed to combine the visceral and the humane (without making either seem a contradiction of the other) as well as Val McDermid. ”Killing the Shadows” is further proof that she’s the best we’ve got.