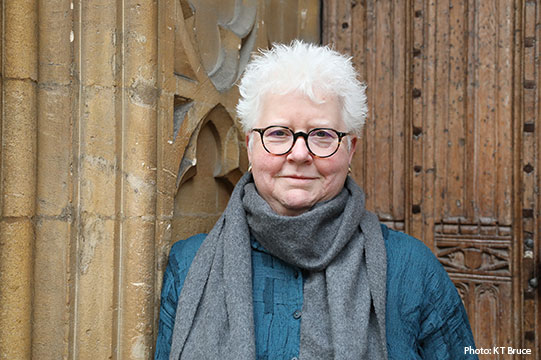 I never imagined when I started on this journey that I would have the success that has come my way. All those novels, radio plays, short stories, non-fiction and even a children’s book make a significant pile that I have every intention of adding to.

I divide my year between writing and promoting my work at home and abroad, and when I’m not travelling, I’m in Edinburgh, where I live with my partner. Most days, I feel like one of the very lucky ones.

Giving Up The Day Job

I didn’t have the practical skills to make a success of writing drama, and the agent I had then didn’t do anything to help me acquire them. In fact, he fired me because I didn’t make him enough money. (so who’s got the last laugh now?) So I decided to turn my hand to writing a crime novel, because I’d always enjoyed reading the genre, and I’d been very excited by the New Wave of American women crime writers, who made me wonder if I could write something similar with a UK setting.

I started writing Report for Murder in 1984, and it was published by The Women’s Press in 1987. The rest is history… I finally gave up the day job in April, 1991, and I’ve been making my living by writing ever since. I was the Manchester Evening News‘ crime reviewer for four years, and I still review regularly for various national newspapers. I also write occasional journalism and broadcast regularly on BBC Radio 4 and BBC Radio Scotland. 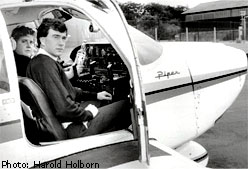 Meanwhile, I was attempting to become a writer. I wrote my first attempt at a novel when I was working in Devon. The best thing I can say about it was that I actually finished it. It was a typical 21-year-old’s novel – full of tortured human relationships, love, hate, grief, angst, not to mention the meaning of life. It was, naturally enough, rejected by every publishing house in London. But an actor friend who read it thought it would make a good play.

So I turned it into a script and showed it to the director of the Plymouth Theatre Company. And he decided it would fit perfectly a season he had planned of new plays by new writers. So there I was, at 23 a performed playwright. It wasn’t what I had intended, but I was happy with it. I later adapted the play, Like A Happy Ending, for BBC radio. And I was commissioned to write another play, this time for a touring company in Lincolnshire and Humberside.

I had always wanted to write, ever since I realised that real people actually produced all those books in the library. But everyone told me that it was impossible to make a living from writing, that I needed to have a proper job. I knew I wasn’t the sort of person who would be suited to a proper, nine to five job with a neat hierarchical career structure, so I became a journalist.

I spent two years training in Devon, winning a clutch of awards, including Trainee Journalist of the Year, then for fourteen years I worked on national newspapers in Glasgow and Manchester, ending up as Northern Bureau Chief of a national Sunday tabloid – a title that sounds far grander than the reality, I should confess. 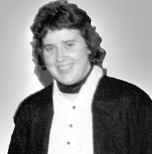 To everyone’s amazement, including mine, I was accepted to read English at St Hilda’s College, Oxford – at 17, one of the youngest undergraduates they’d ever taken on, and the first from a Scottish state school.

survived the culture shock of arriving in a place where no-one understood a word I said, and seized every experience I could get my hands on.

I grew up in Kirkcaldy on the East Coast of Scotland, a small town famous for producing linoleum and for being the birthplace of the economist Adam Smith. It was at the heart of the Fife coalfield, and I spent a lot of my childhood with my grandparents in the mining village of East Wemyss.

Dubbed the Queen of Crime, Val McDermid has sold over 17 million books to date across the globe and is translated into more than 40 languages. She is perhaps best-known for her Wire in the Blood series, featuring clinical psychologist Dr Tony Hill and DCI Carol Jordan, which was adapted for television starring Robson Green and Hermione Norris. She has written three other series: private detective Kate Brannigan, journalist Lindsay Gordon and, most recently, cold-case detective Karen Pirie, whose debut appearance in The Distant Echo is soon to become a major ITV series. She has also published in several award-winning standalone novels, books of non-fiction, short story collections and a children’s picture book, My Granny is a Pirate.

Her latest Karen Pirie novel Still Life was published in paperback in February 2021, to be followed in May by a graphic novelisation of Resistance, her critically acclaimed 2017 radio drama series, illustrated by Kathryn Briggs and published by the Wellcome Collection. Val’s 2021 hardback novel, due in August, launches a brand new series. More details to follow!

McDermid continues to be a remarkably versatile writer for stage, microphone and screen as well as books. In early 2017 Val’s latest BBC Radio 4 drama series, Resistance, aired to great acclaim. BBC Radio 4 has also broadcast five series of her comedy crime ‘Dead’ serial, starring Julie Hesmondhalgh. And in the last couple of years, she has returned to writing for the theatre with Margaret Saves Scotland as well as creating the TV series Traces based on her original idea and starring Molly Windsor and Martin Compston which was well received in late 2019 and was most recently aired in a primetime BBC One slot in January 2021. Series two goes into production later in 2021 as does the ITV adaptation of the new drama Karen Pirie based on Val’s eponymous series character.

She is also an experienced broadcaster with regular and hugely popular appearances on TV and radio. Val has guest-edited BBC Radio 4’s Front Row, fronted features for BBC Two’s The Culture Show, written and presented many radio documentaries and appeared on a remarkable range of TV shows from Question Time to Have I Got News For You. She further added to her broadcasting credentials in late 2016 by captaining the winning University Challenge alumnae team, having previously become Celebrity Mastermind champion! She has also been a member of winning teams in Eggheads and Only Connect Sport Relief.

She is lead singer of the Fun Lovin’ Crime Writers, possibly the only band made up of crime writers ever to play at Glastonbury. And her entertaining lockdown video series, Cooking The Books: Recipes from the Fiction Kitchen garnered tens of thousands of fans on YouTube and Facebook.

Val has won many awards internationally, including the CWA Gold Dagger for best crime novel of the year, the CWA Cartier Diamond Dagger, the Grand Prix des Romans D’Aventure, the Lambda Literary Foundation Pioneer Award, the Stonewall Writer of the Year and the LA Times Book of the Year Award. Uniquely, she has been shortlisted in four different categories in the Mystery Writers of America Edgar Awards. In 2016 she received the Outstanding Contribution to Crime Fiction award at the Theakston’s Old Peculiar Harrogate Crime Festival and in 2017 she was elected a Fellow of both the Royal Society of Literature and the Royal Society of Edinburgh. Val has previously served as a judge for both the Man Booker Prize and the Women’s Prize for Fiction, and was the Chair of the Wellcome Book Prize in 2017. She is the recipient of six Honorary Doctorates and is an Honorary Fellow of St Hilda’s College, Oxford. She is Visiting Professor in the Centre for Irish and Scottish Studies at the University of Otago in New Zealand. She is Patron of the Scottish Book Trush and a Trustee of the Homeless World Cup Foundation. Her story Resurrection: Message from the Skies was a landmark conceptual installation in Edinburgh in January 2018.

Val was born in Kirkcaldy, a coastal town in the heart of the Scottish mining community. She graduated in English from St Hilda’s College, Oxford – the first from a Scottish state school to do so – before going on to be an award-winning journalist for sixteen years. She is a lifelong Raith Rovers Football Club supporter, has served as a board director, and is the home strip shirt sponsor. Val’s other loves in life include walking, music, gaming and cooking.