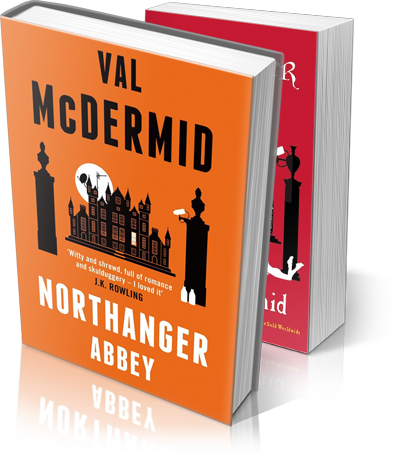 Book Description:
A modern re-imagining of the Gothic Classic Northanger Abbey by the bestselling crime author Val McDermid. The second book in The Austen Project.

Seventeen-year-old Catherine ‘Cat’ Morland has led a sheltered existence in rural Dorset, a life entirely bereft of the romance and excitement for which she yearns. So when Cat’s wealthy neighbours, the Allens, invite her to Edinburgh Festival, she is sure adventure beckons.

Edinburgh initially offers no such thrills: Susie Allen is obsessed by shopping, Andrew Allen by the Fringe. A Highland Dance class, though, brings Cat a new acquaintance: Henry Tilney, a pale, dark-eyed gentleman whose family home, Northanger Abbey, sounds perfectly thrilling. And an introduction to Bella Thorpe, who shares her passion for supernatural novels, provides Cat with a like-minded friend. But with Bella comes her brother John, an obnoxious banker whose vulgar behaviour seems designed to thwart Cat’s growing fondness for Henry.

But Cat gets far more than she bargained for in this isolated corner of the Scottish Borders. The real world outside the pages of a novel proves to be altogether more disturbing than the imagined world within…

The Austen Project is a breathtaking tribute to Jane Austen. I can’t wait to read the other five “updates” while being reminded to reread, joyfully, the originals.

Undoubtedly worth waiting for.

The marriage of Austen and McDermid should keep us on the edge of our seats.

An exquisitely realised tale of the uncertainty and brutality of teenage years told with the lightness of touch and humour that Val is famous for. It also contains the most detailed, and honest, description of the Edinburgh Fringe that I’ve ever had the pleasure of reading. I’ll never look at the Book festival in the same way again. Utter brilliance from McDermid.

NORTHANGER ABBEY is funny, clever, subversive and Scottish. No bonnets – all brio.

Rife with conflicts of love, gossip, misunderstandings, and updates on social media, it is an accessible and enjoyable read, especially rewarding for young readers as a gateway into appreciating the classics.

McDermid’s reworking of the original novel is intelligent, amusing and well-written… captures beautifully how it feels to be a teenager… McDermid is a subtle and witty writer and it’s hard to imagine a better evocation of the spirit of the original.

A fun rendering… McDermid’s Abbey, with its passageways and dark corners, is fantastic, and this novel is a lark.

McDermid’s great virtue is to have made Austen’s characters seem fresh in the way they would have been for her first readers… I can imagine Jane herself applauding.

… note perfect… breezy, vital, inventive… Her obvious pleasure in the task is as contagious as Austen’s wit … The only possible recommendation is to acquire this book and read it.

NORTHANGER ABBEY by Val McDermid is light, fun and full of enough charm from the original story and interesting new twists to be a very enjoyable read.

About The Austen Project

The Austen Project will launch with the release of worldwide bestseller Joanna Trollope’s reimagining of Sense & Sensibility in October 2013, and will continue with Val McDermid’s reworking of Northanger Abbey in Spring 2014 and Curtis Sittenfeld’s Pride & Prejudice in Autumn 2014.