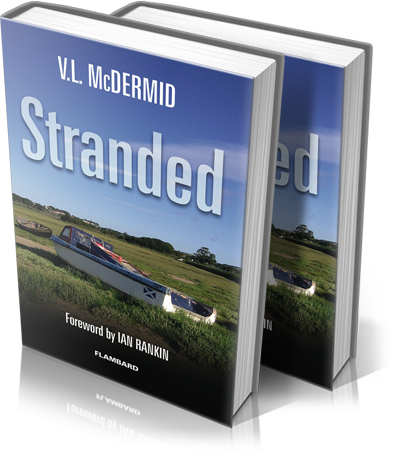 Synopsis:
A new collection of short-stories from the leading contemporary crime-writer, with a foreword by Ian Rankin.

White nights of passion and revenge in St Petersburg. A bingo-hall tyrant trapped by masked intruders. The sleazy flipside of the international publishing scene. An author succumbing to the deadly lure of cybersex.

Stranded demonstrates yet again the scope of Val McDermid’s imagination, her versatility as a stylist and her immense powers as a storyteller. As well as McDermid’s popular series character, private eye Kate Brannigan, this diverse collection contains narrative voices, both female and male, from different continents and an eclectic range of backgrounds.

McDermid has chosen the short-story form to probe not only the motivations of the criminal underworld but also the nature of crime itself, all the time playing with crime-writing and pushing it to its limits. There are even occasions where McDermid defies the genre altogether and the collection is framed by two stories that show a writer exploring fresh territory.

Grit, sex, glamour, intrigue and unexpected turns: Stranded is a showcase of trademark McDermid that will strike a few surprising chords amongst even her most devoted readers.

There are stories here which will make you shudder, and which will linger long in the mind.