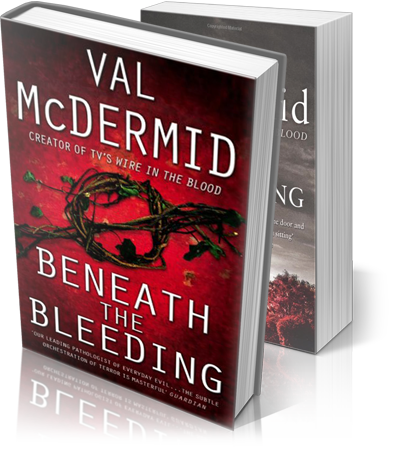 Synopsis:
Tony Hill, criminal profiler and hero of TV’s Wire in the Blood, is back in a terrifying psychological thriller from bestselling author Val McDermid. A city is mourning. Bradfield Victoria’s star midfielder has been murdered, bizarrely poisoned in an apparently motiveless killing. Then a bomb blast rips through the football stadium.

Dozens lie dead, many more injured. Is it a terrorist attack or a vendetta against the Vics? Or something even more sinister? As he lies in a hospital bed, psychologist and profiler Dr Tony Hill struggles to make sense of the fragments of information he manages to gather. But his customary ally, DCI Carol Jordan, is being pushed to the margins of the investigation by intelligence services determined to prove themselves indispensable. It wouldn’t be so bad if Tony and Carol could agree about who they’re looking for. But even their relationship has its dislocations and dark places. Beneath the Bleeding sets Tony and Carol at odds as they have never been before, forcing them to ask questions of themselves they would never have imagined possible.

All the craft, panache and pace that we have come to expect from this outstanding writer… Vintage stuff: unplug the phone, lock the door and prepare to read in a sitting.

Another intelligent and absorbing offering from one of crime fiction’s most consistent performers.

McDermid’s usual ingredients of fear, revulsion, ingenuity and heroism… this book is all the more gripping because some holds are barred.

Peerless…one of the world’s finest crime writers, McDermid is currently at the top of her game.

McDermid is at the peak of her murderous craft… on the page, McDermid makes criminal profiler Hill every bit as engaging as [Robson Green].