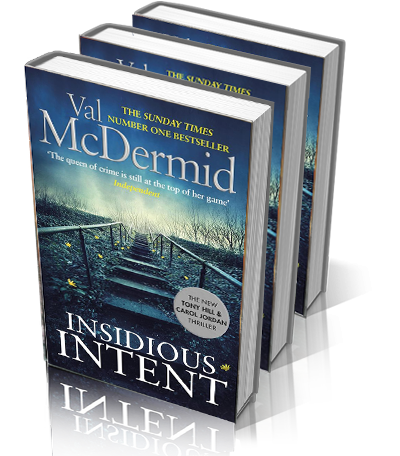 ‘When charred human remains are discovered in the driver’s seat of a burning car, DCI Carol Jordan and psychological profiler Tony Hill are brought in to investigate…’

In the north of England, single women are beginning to disappear from weddings. A pattern soon becomes clear: Someone is crashing the festivities and luring the women away – only to leave the victims’ bodies in their own burned-out cars in remote locations. Meanwhile, Detective Sergeant Paula McIntyre and her partner Elinor must deal with a cruel cyber-blackmailer targeting their teenage ward, Torin.

Number one bestseller, Val McDermid returns with her pulse-pounding, suspenseful new novel featuring two of the most distinctive and iconic characters in crime fiction: Tony Hill and Carol Jordan.

This is McDermid’s most expressive and emotional novel to date, giving readers more than just a clever criminal to get their teeth into.

…this series felt as if it had been given a new lease on life. It certainly remains the case here and the ending…. well the ending sets us up for something completely different.