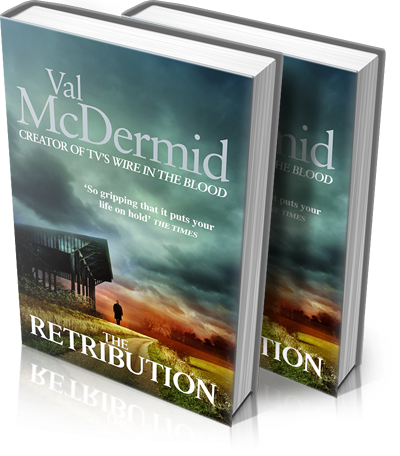 Even more twisted and cunning than ever before, he is focused on wreaking revenge on Tony – and DCI Carol Jordan – for the years he has spent in prison. Tony doesn’t know when Jacko will strike, or where. All he knows is that Jacko will cause him to feel fear like he has never known before? and devastate his life in ways he cannot imagine…

The Retribution won a place on the longlist for the Green Carnation Prize 2011. Val’s 25th novel appears on the thirteen-strong longlist alongside books by writers including Michael Cunningham, Jackie Kay, Ali Smith, Colm Toibin and Jeanette Winterson.

Val McDermid’s 25th novel is stunningly good, but it comes with a health warning. It is truly disturbing.

McDermid never pulls her punches in her graphic descriptions of the evils men (and women) inflict on each other.

Her writing is taut, her plotting pacy… McDermid is particularly good at analysing human damage and its effects.

To write one brilliant book is hard. To write 25 is a miracle. That is what Val McDermid has achieved over the course of her career and it’s why she is a much-loved legend in the literary world… the pace here is flawless and the various storylines are expertly interwoven… a superb crime novel.

Val McDermid has done more to establish the British variant of the serial killer than anyone – so successfully, indeed, that everyone else’s serial killers seem pale imitations.

Fans of Val McDermid’s dark thrillers will be beside themselves with glee.

Good to see McDermid still at the very top of her game after a quarter of a century of scaring the hell out of us.

A master class in how great crime fiction can, and should, be.

— We Love This Book