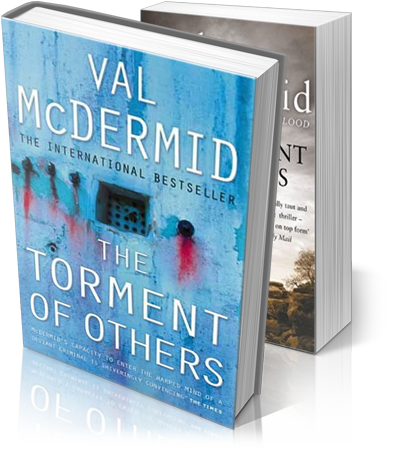 The Torment of Others

Synopsis:
Clinical psychologist Dr Tony Hill and Detective Chief Inspector Carol Jordan face the toughest challenge of their careers when they are confronted with an ‘impossible’ series of murders. Back in Bradfield after her traumatic experiences in Berlin, Carol is surprised to find Tony has followed her there to take up a post in the local secure mental hospital. When a prostitute is murdered in a particularly grotesque and stomach-churning way, she turns to him for help.

Bizarrely, this killing matches in every detail a series of murders that took place a couple of years previously. A series of murders for which Derek Tyler was tried, convicted and sentenced. There has never been any doubt about his guilt. But now the ghost of his crimes has risen again. A second prostitute murder soon follows and the team are struggling. While Tony tries to crack Tyler, the police decide to mount an undercover operation that goes horribly wrong.

This is a disturbing, high-tension book, unstinting in its portrayals of psychological distress. One of McDermid’s finest, which is saying a lot.

It’s hard to know what to praise first here: the impeccable plotting or the sharp social relevance of the narrative (a McDermid speciality). Most of all, though, it’s the relationship between her two central characters that makes THE TORMENT OF OTHERS work so well. This is a real, adult relationship; complex, combative and nuanced.

The Kirkcaldy-born crime writer has delivered a powerful and disturbing novel about the very measure of evil… Val McDermid is an intelligent, supremely talented novelist and, with this latest tale, she is writing at the height of her power. It may not be comfortable, it may be neither pretty nor pleasant, but it is utterly compelling

THE TORMENT OF OTHERS has a thoroughly modern brutality. It is a tribute to the power of Val McDermid’s imagination that she makes the novel seem so believable.

Stunning new psychological thriller featuring Tony Hill, hero of The Wire in the Blood, from one of Britain’s bestselling novelists: ‘Val McDermid has become our leading pathologist of everyday evil… The subtle orchestration of terror is masterful.

Winner Of The 2006 Theakston’s Old Peculier Crime Novel Of The Year.
Shortlisted For The 2004 CWA Gold Dagger And For The Mystery & Thriller Book Club People’s Choice Award.